We just wanted to thank every so much for they’re help in guiding us through the adoption process for Saffron. We have since changed his name to Neville, and he is the perfect addition to our family. He is an excellent play companion to our rambunctious Snips, and his presence seems to make the hierarchy a little more even. When he is tired of playing he is super lovey and snuggly. He sleeps with us every night and starts purring the moment he’s picked up. We love him so so much and just wanted to thank everyone at PPAH for their help 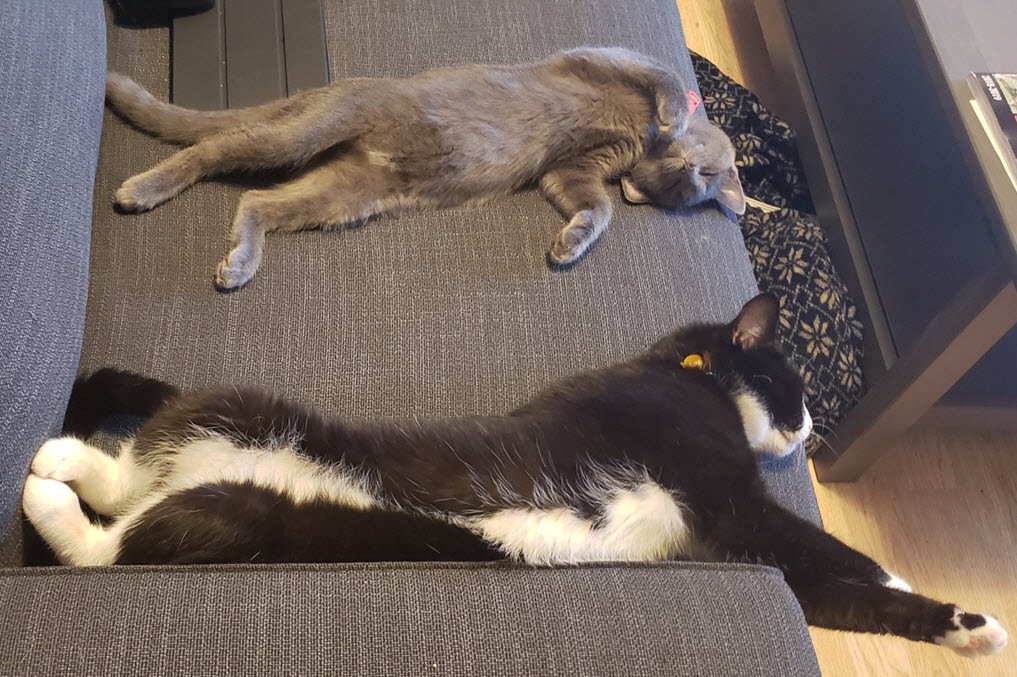 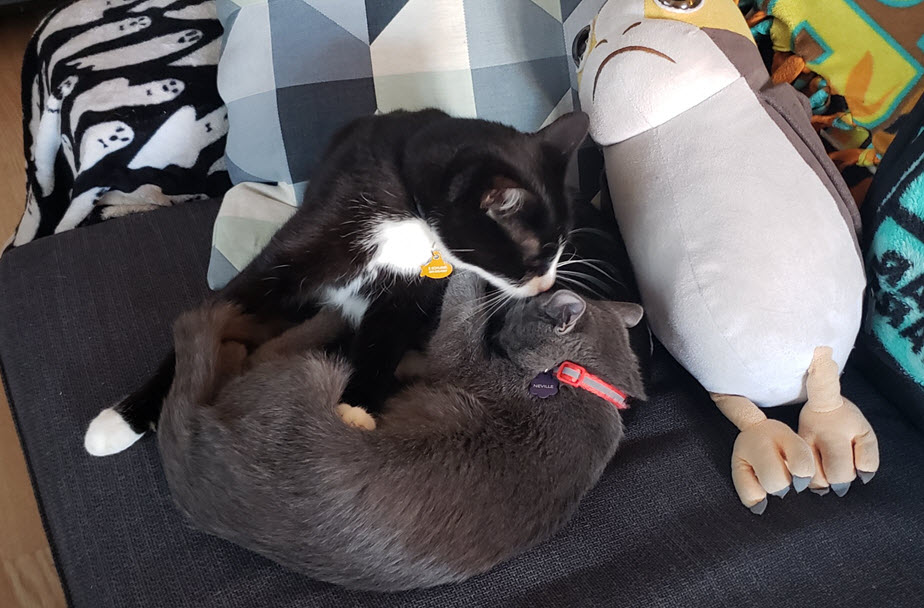 About 2 years ago, I walked into a shelter looking to adopt a black and white male cat, instead I walked out with a crazy orange female cat who was about 2 years old, and at the time named Queso (now Remy). I always joked that there was no way Remy was actually 2, because she acted like a 6-month-old kitten. Remy loves other cats and has plenty of energy. Recently, I figured it was about time to add a kitten to the family to give Remy a friend to play with (or snuggle with). Initially, I started my search by looking for rescues in the Chicago area and landed upon Precious Pets Almost Home. I knew I wanted a cat that loved to snuggle but had plenty of energy to play with Remy. Which is how I landed on Burt (formerly Greyson).

Burt is an absolute love bug, he loves to snuggle, purrs instantly when pet and likes to sleep on my lap while I work. Personality wise, he is almost a complete opposite of Remy. Burt was exactly what Remy needed, within about a week, Remy had completely accepted him into her life. It’s hard to get the two of them to stop playing together. Remy also loves to clean Burt, which Burt puts up with for about 10 minutes before making an escape.

Precious Pets Almost Home was wonderful to work through the adoption process with. They really care about their animals and want to make sure that they are a good fit for your home. Burt was a perfect fit for myself, Remy and my home. I am so glad that I made the decision to adopt him! 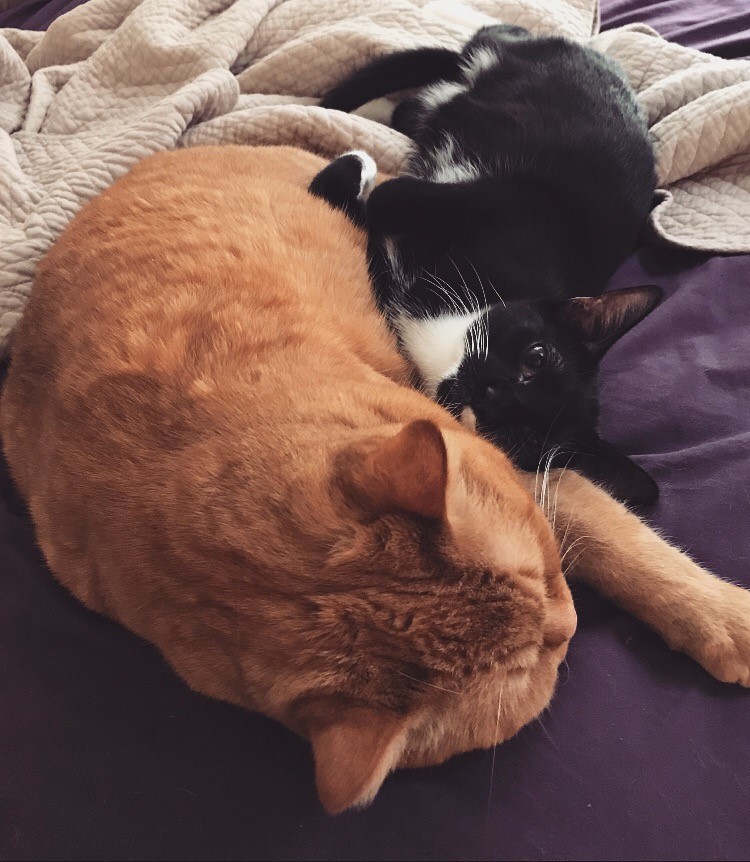 Quickly it became evident that Tucker, who now goes by Morris, would fit in wonderfully. Prior to adopting Morris, I already had two cats to love and care for at home – Penny (11 years) and MacAlastor (2.5 years). I knew Penny would do well with the new addition as she had done such a wonderful job when I welcomed MacAlastor just over two years ago. However, I was certainly nervous how MacAlastor would feel with this new addition, especially given his role as the male feline who protects and covers us with so much love every day. And, as expected, MacAlastor was skeptical of Morris and Penny was apathetic beyond words.

We separated Morris into a room of his own with a litter box and his favorite hard food. Within a couple hours he was wandering around the bedroom absorbing every smell he could with his little black nose. As he explored, he paid no interest to any other living thing – there was just too much to sniff! However, by the middle of the night, he was interested in snuggling and gentle pets around his ears and back. The next day we allowed MacAlastor time alone in the bedroom and Morris explored nearby rooms. We continued this exchange of the two boys for two days, and by the third day, they could be in the same room. In fact, MacAlastor even began the process of cleaning Morris by Sunday night and hasn’t really stopped with his nurturing and curiosity of Morris since!

Now, there is no question that MacAlastor and Morris will be great friends in the years to come. They follow each other around, nap together constantly, want to share the same food bowl, and they even have been spotted going to the bathroom a couple times together! It has been such a relief and a blessing how fast my cats have acclimated and even more so, to see what great friends they are becoming.

I have loved cats since I was a little girl and was overjoyed when my oldest sister wore my dad down and convinced him to let us have a cat. But when I moved out of the house for college I had to leave my two cats behind for the dorm life! Now, six years later I am finally in a living situation that allows pets but my older sister and I agreed that we shouldn’t separate our cats that have lived with each other for over 10 years so she ended up moving them to her apartment. So I decided it was time to adopt my own cats! My sister-in-law was very involved with the Precious Pets Almost Home organization so I filled out an application through them and started browsing their websites to see what cats were in their care. I realized it was very difficult to pick cats online because they are all so adorable so I worked it out with Kari to meet some foster cats and to go to every pet store that housed their cats – I had to meet them all! At the first pet store I was at, one of the kittens – Donne Darko – started meowing at me and reaching for me through the cage. It was instant love! However, I was hesitant because Donnie Darko was only 6 months old and PPAH’s policy was that kittens had to be adopted into a home with another cat under 5 years of age or adopted with another kitten and I was only looking for one cat! I set aside my love to go to the next store and meet those cats and they were great! But I didn’t feel the connection I was looking for, then I went to the pet store and I met Robot and she stole my heart INSTANTLY and it turned out that she was Donnie Darko’s sister! Oh darn, I had to adopt two cats! However, it turned out that Robot had already been claimed for adoption by someone else. I had already come to terms with taking home two cats so I went back to the first pet store to see Donnie Darko and meet his brothers. From his brothers I met Kinky Boots and fell in love again! I ended up taking both Donnie Darko and Kinky Boots home with me.

Now Robinton (Donnie Darko), Harrington (Kinky Boots), and I couldn’t be happier!! Every night when I get home from work and sit on my couch, Harry is in my lap and Robby is not far behind. I’m not allowed to do anything but give them attention for the first 20 minutes that I’m home and they want me to be on top of me the whole night, even when I take work home with me. The three of us have had to work very hard on creating boundaries when I’m trying to work from home, but they make everything so much better, even work! Our favorite thing to do is cuddle up on the couch to watch netflix but their favorite thing to do is to wake me up when I’m sleeping so that I can pet them! They love to groom each other and it’s so precious to see them cuddling and being the best of friends! Their favorite place in my apartment is the bathtub (I have no clue why) and they have destroyed my shower curtain while expressing their love for my bathtub, but it is the only part of my house that they have damaged in any way, so I will gladly replace the $20 shower curtain rather than something like my couch! These cats have brought me so much joy and peace with their constant affection and love. Adopting these boys was definitely the best decision I have ever made and I am so grateful to Precious Pets Almost Home for helping to bring them into my life!

View All Our Adoptable Pets…